You may recall our post from July that detailed the role that custom music played in our production of Stories in Care: Season 2. If not, you can check it out here. In it, we introduced Alex Yaker, a multi-instrumentalist and sound engineer who has also been an adjunct professor at the Community College of Philadelphia teaching a course on Location Sound as well as running his own production company. But this fascinating member of the Narrative Media team deserves much more than a brief intro.

Alex helps Narrative Media with sound on a lot of its projects, frequently supporting them in the field and accompanying them to shoots to record interviews or other audio, and subsequently managing the post production aspect as well. In addition, he has collaborated on projects all over the globe for the Travel Channel, IGTV, HBO, PBS, ESPN, and NPR public radio, to name just a few.

Naturally, when starting a conversation about the importance that good audio plays in a production, Alex would be the person to talk to. His philosophy that audio and sound make up at least 50-51% of an entire piece, especially in a narrative video format, is one that he can both passionately and creatively embody.

“A lot of productions undervalue sound to begin with,” he states.

“A lot of times, in the production, sound is viewed or treated as an afterthought to beautiful video. But they forget that what drives the video is the narrative and the sound. The importance of having really good quality sound is paramount – it can’t be understated. You can always notice when sound isn’t great, but you don’t always necessarily notice if the video is subpar.” 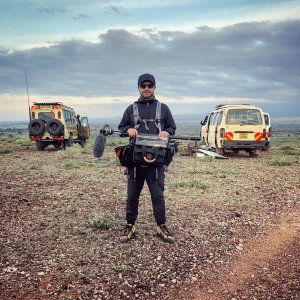 Alex’s statements are not just about capturing dialogue but also capturing wild sound. Wild sound basically means the ambient noise that comes from the environment in which you are recording, for example, maybe the sounds of a forest or of traffic – and later on, that sound is used to make the piece come to life in an authentic and resonant way.

To illustrate his point, Alex shares a story of a time that he was shooting a small film and one of the scenes was in the forest. A man was talking and screaming loudly, so Alex instinctively moved 50-100 feet away to record the sounds from afar, in order to capture the ambience and natural reverb of the forest. Genuine, in-the-moment sounds like that are difficult to replicate and add later on, shares Yaker. “If you can add it right on set it really amplifies the effect of the piece.”

On Working with Narrative Media

When asked about working with Andrew Poag and the Narrative Media crew, Alex compares the experience to a balanced use of the physical senses. He shares that when collaborating with the NM crew it’s often like completing different pieces of a puzzle. “If you try to do everything at once, it’s sensory overload and you might not pay as much attention to one particular element – but if you close your eyes, often times you’ll hear better. Because one of your senses is shut off, the others become more important. When you have multiple crew members who are able to focus on their individual parts of the production, it all comes together naturally and everything runs more efficiently. It benefits not only the production, but also the client.”

Alex also reiterates the rest of the crew’s unanimous sentiment that there is a huge benefit to having someone focused solely on sound (or whichever role is theirs) to ensure that it’s not treated as an afterthought. When crew members can focus on just their job (i.e. camera department only has to worry about picture, sound department only has to worry about sound), productions can run much more smoothly, and he credits that to the high caliber crew that call Narrative Media home.

He goes on to say (of Poag) “I feel like he recruits the best crew members. Everyone on set is top-notch and has tons of experience, and oftentimes they’ve worked together before.” The interplay between Andrew and Alex usually goes a little something like this: Andrew calls Alex with a specific job and explains what it is, then the pair brainstorms about the needs for the job, which results in a conversation about which mics to use or what gear to obtain. It’s a collaborative, consultative approach to finding out how to make the sound the best it can be for any particular project.

Life Beyond the Set

In addition to the expertise he lends to corporate and documentary-style productions, Alex’s off-set activities include the many bands he’s a part of. A prolific multi-instrumentalist, Alex has been playing in numerous bands since the age of 15. His main instruments are keyboard and piano, but he also plays electric guitar, nylon string classical guitar, and bass guitar.

Currently, Alex is active in two bands, one of which is his own. Roomtone (the band’s name is also a production term), has a sound that is loosely based on bossa nova. They’re on a brief hiatus right now because Alex has a plenty-full plate, but that doesn’t mean he’s not performing and writing. A composer and songwriter as well, Alex is also part of a newly formed band called “Static Shapes” that has one record out already (which was released via Zoom) and one that is still in the process of being written. He joined another group, “I Think Like Midnight” about 4 months ago on synth and plays actively with them, averaging 5 or 6 shows in the last couple of months (many of which have been outdoors.) 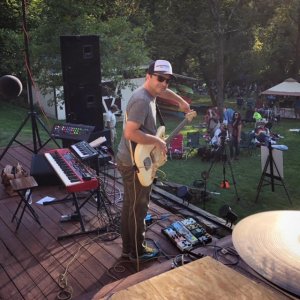 When asked about his preference between playing indoors or out, he says he enjoys the collective energy of playing festivals, but admits that the sound quality isn’t as great. He likes to play indoors for better sound, more intimacy, and seeing people react to the music with a more personal energy. An avid listener in his own right, Alex draws ample inspiration from seeing shows as a member of the audience and from keeping up to date with the music scene – always doing his best to support local music. When he goes to shows, you can usually find him near the stage, checking out the gear.

A self-proclaimed “gear nerd,” Alex stays busy in his home studio working on recording and sound engineering. While work has slowed down during the pandemic, he has been experimenting with a few synthesizers and some new gear that he acquired – he tells me he has a substantial amount of synthesizers now. His writing process is typically very organic, in that he’ll be playing around with an instrument, twirling some knobs or building on a guitar riff, adding an effect, until a melody comes to him that he wants to record. Next he’ll often add a drum track , in a process that very much creates itself as it evolves. Occasionally, he’ll wake up with lyrics and a melody in his head, and he’ll put it into his phone as a point of reference until he has time to unpack it in the recording studio.

Alex is just as dynamic in a non-musical sense, too. His crew counts on him to bring a comedic energy to the set, citing his frequent use of puns as some of their favorite Alex-isms. He says he just can’t help himself – he gets it from his dad – and now it’s fitting to make dad jokes of his own since he has a son who is almost two (and was born on Christmas day). To add yet another impressive layer, Alex can deliver these puns in Russian, Latvian, and Spanish too! You may have heard of the parallels between musical and linguistic aptitude, or at least that musicians process music as language, which in this case would seem to be true.

But don’t take marble for granite, explore Alex’s talents for yourself at roomtone.bandcamp.com. 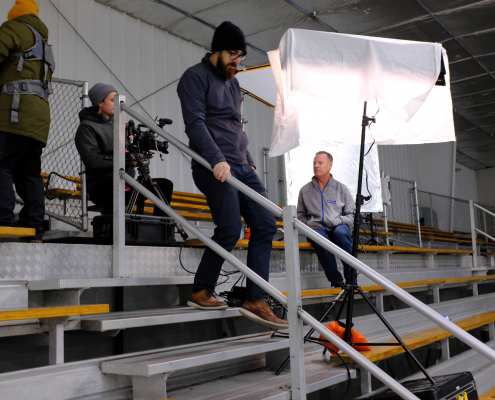 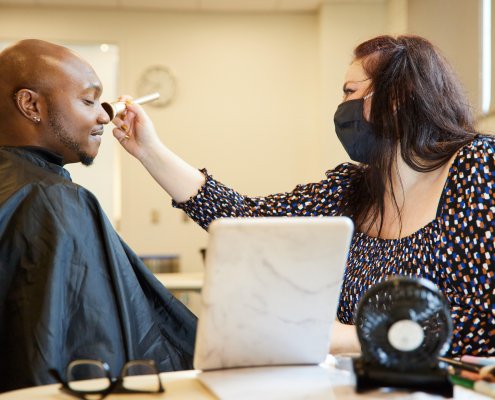 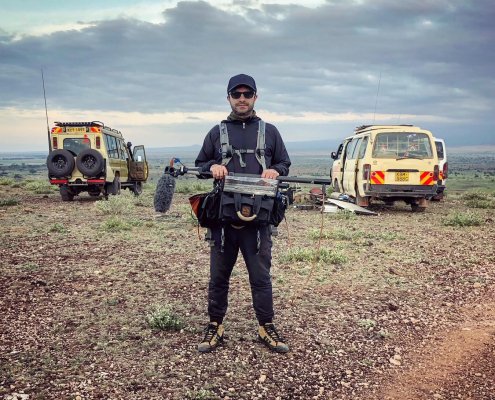 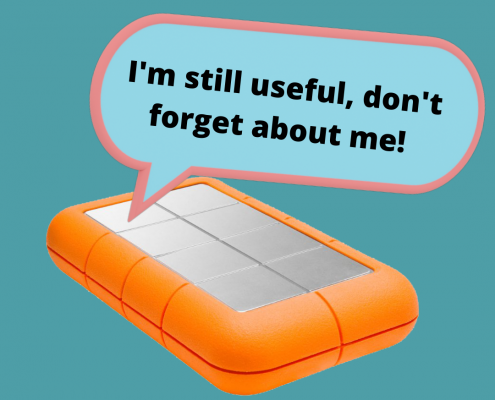 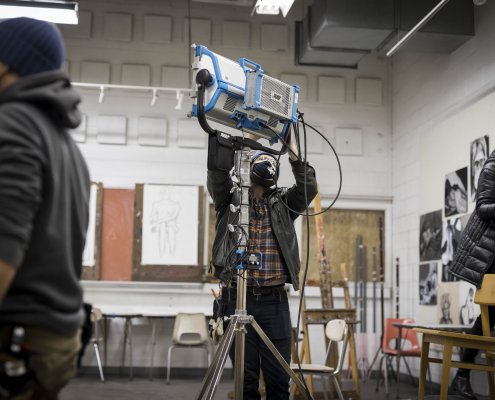 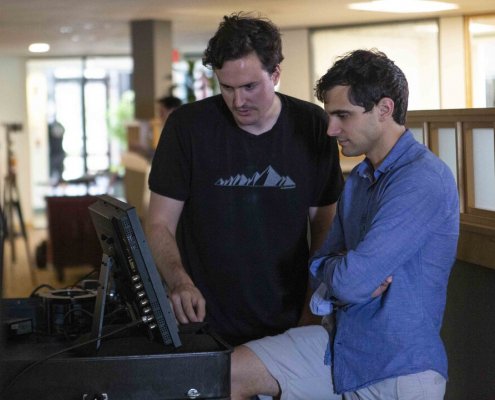