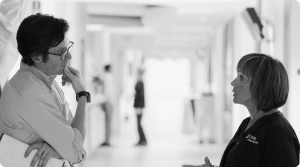 As the President and Founder of Narrative Media, Andrew takes a hands-on approach, serving as a producer, director, and editor. Prior to starting Narrative Media, Andrew spent a decade in the field of government and political communications honing the skill of making complex topics easy to understand by using effective writing and storytelling techniques.

In 2007, following New Jersey Governor Jon Corzine’s near fatal car accident on the Atlantic City Expressway, Andrew wrote the script for and assisted in the production of a seatbelt safety public service announcement featuring the Governor. The PSA was picked up nationwide and featured heavily on local and national broadcasts.

The following year, Andrew oversaw the creation of the Office of Video Communications in the New Jersey Governor’s Office. During this time, he oversaw production of weekly video messages from the Governor, members of the administration and key staff at a time when online video and social media were in their infancy.

After leaving the Governor’s office in 2010, Andrew started Narrative Media and has worked with a diverse array of organizations and institutions including The White House, The University of Pennsylvania, Cooper University Health Care, Main Line Health, University Medical Center of Princeton, Rowan University, Cooper Medical School at Rowan University, University of the Sciences, Muhlenberg College, Bancroft, The Boys and Girls Clubs of Philadelphia and many others.

One of his career highlights so far has been working in The White House alongside then presidential speechwriters, Jon Favreau and Jon Lovett, to produce and edit the video shown during President Obama’s 2012 White House Correspondents Dinner Speech.

Andrew resides in Philadelphia’s Western Suburbs with his wife Tara, their daughter Vivian and dog Sabine. In his free time, Andrew enjoys cooking for family and friends, exploring new music, attending concerts around Philadelphia and endlessly tinkering with stereos.